Time to think, time to do… 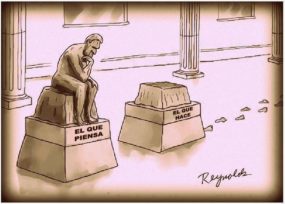 Think about this for a second: if you added up the amount of time you spend thinking about doing things and put it all together, how many of those things would you have actually done?

Planning can be important. Abraham Lincoln famously said that if he was given an axe and was told he had ten minutes to chop down a tree, he’d spend the first nine minutes sharpening the axe. But don’t confuse constructive planning with the actual work. Even Lincoln recognized that he would have to get down to swinging that axe pretty quickly. If you’ve been in sales for any length of time you’ll know the mindless humdrum that is ‘paralysis by analysis’ – the process of over-thinking rather than just making a decision which drives you nuts about your customers. It’s not just them that drag their feet though. If you’re a human being, you’re guilty of it too from time to time. But if your customers are going to drive you round the bend with their delaying tactics, why make the situation worse by piling more of your own onto your already full plate?

Stick to the facts, not the ‘story’

I read a story recently of a guy who gave up his career to pursue a passion for pottery. He signed up for six months at a pottery school out in the countryside with accommodation provided and moved on with great enthusiasm. But when he got there he discovered it wasn’t what he thought it was. The pottery wheel he was expected to work on was lopsided so every time he threw a pot it was wonky. Accommodation was rustic to say the least and while the holes in the wooden walls enabled a pleasant breeze, they also let the bugs in. And there was no hot water. It was too much and he was miserable. But his friend – a bright guy – said to him that if he could forget about the ‘story’ and stick to the facts, all that was really wrong was that the wheel needed to be leveled, the holes in the walls needed to be plugged and he needed to call someone to fix the hot water. If he did those things, his friend asked, did he still believe in the vision and think it was worthwhile pursuing?

You see, we get bogged down in the ‘story’ all the time. We tell ourselves that things are way worse than they actually are because we allow the facts to get clouded by the emotion. The same thing happens when you’re procrastinating in the face of a big task. You don’t allow yourself to see that if you just break it down, there are a few facts to face and the rest of it is just ‘story’. Get better at this, and you’ll save yourself a lot of time-wasting indecision.

Mark Twain said when you have a big ugly frog to eat today, the best thing to do is eat it immediately. There are two reasons for this: the first is that the worst thing you will have to do that day will be out of the way early and you can focus on better things. The second is that sitting looking at it, knowing you have to eat it, isn’t going to get any easier the longer you leave it.

This is the biggest personal advantage available in doing things without delay. Also, take some strength from the fact that you’ll probably never have to actually eat an actual frog, so things are rarely going to be quite as bad as they could be.

Everyone loves a doer more than a talker

There are people who are going to do that thing: write a book, travel to Japan, buy that car, sign up that big client … and there are people who talk about doing it. And talk about doing other things besides. And talk and talk and talk. But the world and everyone in it, gravitates towards those who actually follow-through on their promises. People who ‘do’ rather than people who just talk about it, are the ones who change things and that gives them power. If you want to be one of those, you have to be more like those ‘doers’ and get on with it, rather than those talkers who never seem to get started.