It’s Your Fault, Not Mine 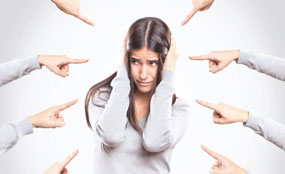 Let’s talk about the Blame Game.

I recently witnessed two people blame each other for their low sales numbers. Not only did I witness this conversation, but because it was on Facebook, where they had an audience. Even worse, their networks read the ridiculous argument with insults, it’s also preserved forever on the Internet.

It’s easy to pass the blame when you get “called out” or screw up big time. Blaming is a lot like the sleight of hand magicians use to confuse or create a misdirection. Here’s the thing about blaming – it can quickly turn into lying. Although, the worst lies are the one’s you tell yourself. In fact, I see people many times double down on their blaming instead of just taking the responsibility.

Yet, blaming others is so easy. Why is this? The simple answer is – ego. Your ego wants you to always be right. In fact, you tell “stories” to yourself everyday to justify and rationalize your position in life. But, by blaming others, you aren’t doing yourself any favors. In fact, by diverting blame, you’re actually hurting yourself and robbing yourself of personal growth opportunities. The first step to creating change is being honest with the most important person in the world. You.

If you’re ready to break the blame game cycle, here are a couple of things you can do:

Check your own ego and start finding solutions to problems instead of diverting the blame. A friend recently told me, “I don’t fear any man and I don’t back down to any unjust criticism.” I asked him what’s more important – being right or being respected? It’s great to not fear others, but you also need to know when to back down from an 800-pound Gorilla.

One thing you can always count on is how people will always let you down. People make mistakes – including you. People will blame you even if you’re not at fault. End of story. The cause doesn’t change the situation. People waste more time on looking for someone to point a finger at than contemplating for a solution to the issue at hand. When someone blames you for something think about how you react. Your ego starts with, “How dare you!” but imagine if you responded with, “I would never want that to happen intentionally. Let’s talk about what we can do to fix it.” Some might believe a statement like this is a sign of weakness, but it actually puts you in control.

Give others grace (even when they might not deserve it). There’s a word you don’t hear very often – grace. It’s difficult when you’re on the receiving end of blame, but in the end you hold the power of how it impacts you. You’ll never control what others do or say, but one thing in life you will always control is the effort you put into communication.

Remove the Emotion. Emotions drive more of your decisions than you may believe. Looking at things objectively only works when there’s no emotional connection. Remove the emotion from a situation and look at things logically. Ask yourself why someone is blaming you and analyze the situation from an outside perspective. If you can practice empathy, you may be able to help them solve their problem instead of reflecting blame back on them.

Here’s a tip to help you refocus if caught in the “blame game” – ask yourself, “Will this impact my life in 40 years?” If not, it’s not worth getting worked up over.

It’s amazing how old school principles still work in the modern world. One the best principles I’ve seen is reciprocity bias. It’s a simple rule that implies how people will reciprocate favors back to us. In the simplest form, it’s smiling at someone and getting a smile in return. However, reciprocity bias can work against you as well. If you blame others or have harsh words about someone expect them to deliver it back.

Blaming is really about insecurities. If you’re giving it, you may be afraid someone is questioning your ability or intelligence. When others do it to you, you fall into the “protect my image” trap. The blame game is easy to stop because you just need to call it out. Find ways to mitigate the damage already caused and put it into perspective.

Here’s the great news, you’ll probably have a chance to use these tips sooner than you think. Your personal growth is dictated on your ability to relate to others in a way that most people can’t or won’t. It starts with your response when you hear blame.

To see Brian in action, book a seat at our next live event in September. To find out more about our event, click here