Control the decision making timeline if you want the sale! 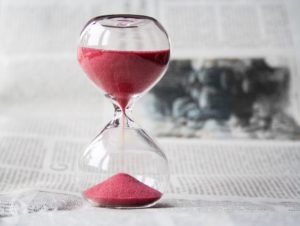 For most sales to be successful, it’s necessary for the salesperson to exert some influence on the timeline. There are those sales that fly in through the window unexpectedly of course, and those that turn up three months after you’ve given up and moved along, but you can’t build a pipeline on such occurrences. And without a pipeline you don’t have real control.

Most businesses understand their sales cycles at least in a loose sense: they know that a sale takes an average of a month, or six months or a year, and it is therefore a relatively simple matter to determine whether you’re selling optimally or not. If your sales cycle should be around a month and it is taking you two, the chances are you’re not controlling the decision making timeline. Here are three common mistakes:

This is the most common and it usually occurs when your pipeline isn’t strong enough to withstand the loss of a prospect. You allow them to go away and think about things when you should just be asking them for the order. Being aggressive in sales isn’t the same as being unpleasant however. It’s perfectly legitimate to turn up the pressure a little. When they want to go away and think about it, ask them what they are going to think about and when they expect to have reached a conclusion. Then make a plan to call them on that day. If you’ve sold properly, understood their need and solved that need, a little pressure won’t put them off.

If customers can normally make a decision in a month, but yours are still deliberating a month after that, you may have given them too much to think about. If you run the risk of losing a sale by not creating enough value, you are at equal risk by creating too much. There’s no need to tell them everything about everything; just tell them enough to solve their needs and make it irresistible. Then ask them for a decision.

Let’s suppose you need a decision within the next four weeks if you’re to make your numbers. If you tell your customer that, you can be sure they’ll take at least that long and in fact, may only really give it proper consideration in three weeks time. That’s because life gets in the way and there is a business to run and frankly no matter how much value they see in what you’re selling, they could easily allow that deadline to slip by. Instead, agree on a decision timeframe. Agree on the next steps and the intended outcome of those steps and move it logically to a close.

By controlling the timeline, you exert enormous control over your pipeline and set yourself up for many more frequent wins.